Use these tabs to find more information about the travel agency and maps.

In Arequipa we took the night bus to Puno which is located by Titicaca lake.

We took the bus at around 11:30pm, so we had time to have diner at Chicha restaurant. We were very tired by then though… specially after two days walking… we were falling asleep as we had wake up at 5am that same day and walked 1200m up.

The bus was comfortable. Big seats that they call bed but are more like a business class seat on a plane.

At 5am we reached Puno. We had no plans,  no hotel. We knew we preferred to go to an island and sleep with the locals as we heard there was no point in spending time in Puno.
Puno is located at 3830m. Titicaca is the highest Lake in the world and is like 3 times bigger than Lake Leman and it is the biggest in South America.

In the bus station,  at 5am there was a travel agency and a guy approached us with the perfect plan for a very good price. We would go to a hotel in Puno just to have a shower,  leave the bag and take a boat that would take us to Amantani island. There we would be hosted by a family as there are no hotels. Everything for around 100 nuevos soles. Deal. Amantani Island is less turistic and more authentic. It is the one we wanted to see, but in the tour in the way back we would see the other one too.

We went to this hotel, had a shower, left the bag and then a van came to pick us up as planned.

The boat left at 7:30am towards Uros floating islands. These are something like 85 islands that are man made and float. 5 uros families live on them on average…. It was incredible. I would prefer to be in prison than to live in one of these islands. They were tiny, and very rudimentary.

Sailing on Titicaca is surreal. No clouds,  sun and not too hot. Incredible views. Take a look to the the photos further down.

Second stop 4 hours later was Amantani. We met our family and walked to their house.
Again this was a unique experience. These people have nothing. Again no electricity,  they cook with fire and dress typical cloths. They speak Quechua and just one of them, Rosa (I guess not her real name) a bit, just a bit of Spanish.

We had lunch at our family’s home,  very basic and then at 4 we met with the group to climb to the highest point of the island where the temples are.

Poor legs. And the altitude makes it hard to breath. One of the group had to be given oxigen and another had the altitude sickness with noise bleeding and headaches.

The walk was incredible. Beautiful. Wonderful. On the top of the mountain we watched the sun go down and the moon rise. It was incredible. Probably the best part of our trip. We had to descend with the headlamps. We had dinner with the family and went to bed. We were a bit worries as temperatures drop below zero at night but it was fine. 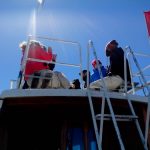 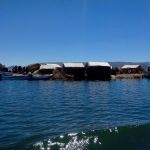 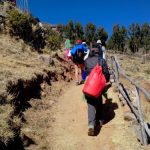 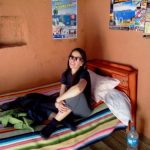 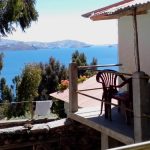 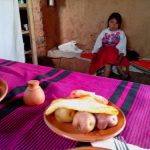 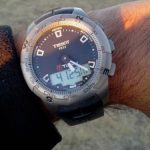 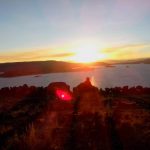 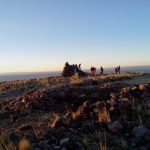 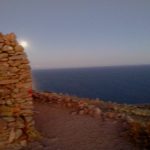