In the last months we have seen some Internet titans redesign their websites. 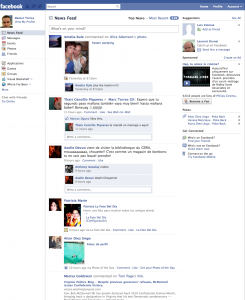 First it was Facebook. They changed a lot. Before they had this bar at the bottom of the page with the apps, chat and so, which is now back to the traditional menus in the top and left.

People complained at the beginning, but this is normal. Changes of this type should be done in consultation with users, but in a dictatorship way. What do I mean with this? People do not like change. When people is used to a way of seeing information and to interact, to change it will always mean to go for worse, at least at the beginning. Over time, users will recognize that the changes were for good. 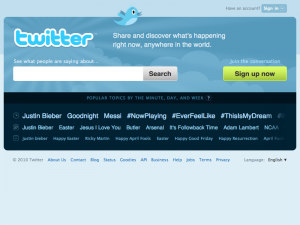 I have talked about twitter many times. At the beginning they struggled to cope with growth and they were down very often. Now they struggle to catch up with things like brighkite (which I love) does: location and photo. Even they could have video, maps and so… but no, they keep it simple. It remind me the fight between video VHS and Betamax. Betamax was the best technical option but VHS won. Well, twitter is not the best, but they have the most important ingredient: success.
Now popular topics, tweets, and users are clear in the frontpage. A “Top Tweets” section that dynamically updates using a custom algorithm to decide what is popular or of general interest. I have always though that the trends are absolutely useless but top tweets could be good, unless we start seeing “good night” or “followfridays”… They also have added a dynamically scrolling list of trending topics that when hovered over explain their trending status. 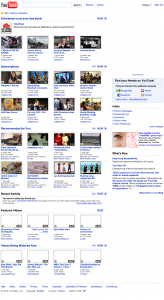 The last redesign was for YouTube. Again people complained. If you take a look at YouTube you will be surprised by the simplicity. It is basically no design. Nothing. Very interesting that such a successful website chooses this simplistic approach. Their secret is in the ajax-like movement of things, with a new commenting system that highlights top-rated comments,  a “like/dislikes” rating system that replaces the previous five star system and a new “next video to watch” sidebar that is “smarter”. It feels different but not a lot. Take a look at the menus, the footer menu, just plain text. No lines no nothing. Is this more user friendly? It is less cluttered, that is for sure. Maybe because it is a google product and googles is not… well particular at design?