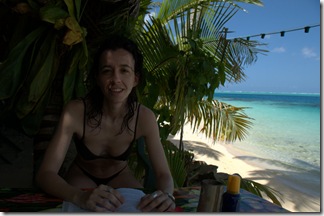 Well yes, it seems like the rain follows us from Geneva. If the first night we thought that we were going to wake up in Australia, tonight I though that we were in the middle of the thunder itself. I woke up several times with the lighting, very nice, I thought, the storm is going to New Zealand, wrong, couple of hours later it was just above us. I do not recall hearing these impressive thunders in my entire life, the floor seem to be moving, scary. Then I started thinking, if there are no road signs, will they have a pararrayos??? The idea of being grilled like a roasted chicken in the French Polynesia started to kick in my brain. Then torrential rain until 8.30 when dani took the car back to Avis with Steve, the Californian who is going to rent now the same car. Now the sky is grey, but it does not rain. I can listen to all those birds that are always jumping by the roads, risking their lifes, or ours trying to avoid leaving a bird tattoo on the roads. This place is so calm and relaxing, you heard the birds and the sound of the ocean, with waves breaking just a few meters from the bungalow.

The floor of the bungalow is made following the traditional style, that is, a thick layer of white stones that are actually coral, with some big grey stones scattered  around and where in theory you have to walk. This is not my case, specially going to the toilet in the middle of the night with the only light of the storm  lighting, so I usually end up with tiny corals between my toes, which I am starting to consider as an spa treatment. I am looking at the white tiare (gardenia) that Rejane cut for our dinner yesterday. It is so perfect that it does not look real. And the smell!!

This is dani now. This morning I went with Steve to leave the car at the AVIS. The lady was waiting for me, and I told her I was bringing a new customer. We couldn’t refill the tank (we only did 95km at an average of 40Km/h) because the electricity was gone in the island (storm). In fact not at our guest house Fenia because they are in the middle of nowhere and they get the electricity from solar panels and the water from the rain.

The lady from Avis charged me 1500 for the petrol and we had to pay until the electricity came back for a while. The visa machine was not working without electricity. She called the supermarket because they have a power unit so I could pay them, but when we were going to go the electricity came at least enough time to complete the transaction.

Steve, who forgot the driving license at the bungalow and that did not result in any problem to rent the car, took me to the pharmacy where I bought some mosquito repellent. Then he drove me to the bungalow.

Steve is a very nice guy. After 35 years of working hard in California, he has manage to escape for a couple of months to visit all these islands. His trip is reaching the end, but he is enjoying a lot. He lives in the woods in a huge property with his own workshop to cut the trees and build the houses. He builds wood houses like the ones we love (wood and glass).

Now we just spend half an hour here in our bungalow with the owner Rejane. She is so nice. We paid her and now we will soon pack. At 5 we have to go to the airport to take the flight to bora bora. Maybe we can now go and walk a bit in the beach.