I have talked about foursquare in the past.

When I first joined them they were only in a few cities and you were not able to edit places or are new ones.

Now foursquare is a completely different different tool, much more powerful and more looking like the one it had my number one in my list: tellmewhere.

I also tested gowalla and it was more sort of a game, leaving stuff and probably more to meet people. I did not like and it has been a while since I don’t try it.

The fact is that location based apps for smart phones are as I predicted, skyrocketing and looks like foursquare is the winner, even after google buzz, which includes latitude and location as well as thread conversations, but again, as I said by limiting it to gmail users would be an impediment for reaching number one, and in fact I feel the hype of buzz has gone down.
Anyway, I wanted to talk about a very nice mash up of foursquare: 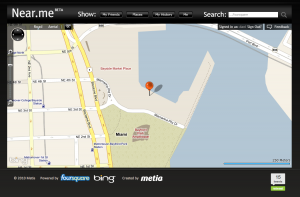 A very nice graphic interface using bing and foursquare to see your friends and places you have been. Very visual and very nice.

Petty that only one of my 600 contacts uses foursquare. I guess here is not that common and I am a strange case.