We arrived early to Road town. We took it easy though. Had breakfast and then left. The nice thing of cruising in the Caribbean and I guess is the same in the Greek islands and other small towns, is that with a day you have more than enough to visit them. I guess it is not the same in a Mediterranean cruise stopping in Rome, Barcelona and so, which deserve a dedicated trip.

We did not take any of the excursions suggested in the MSC Poesia.

Normally it works this way: they are expensive. When you go down to the harbor, you have a pile of tour operators offering you the same thing cheaper. If you go out of the port, there you find the good deals, so this is what we did. We took a tour around the island. It took us to several places and it was fun and nice. 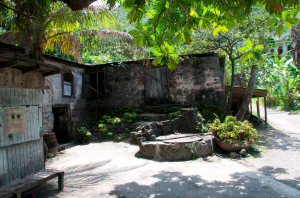 We stopped at a rum distillery, very very crappy but I bought some old rum. See the photo, it looks like a dirty place anywhere in Africa… but the rum, that I tasted yesterday, was not bad. Not great either but a nice souvenir.

The tour took us also to a beach crowded by the cruise people. We were there only for 15 minutes, but we soon continued our tour. There we met a couple from texas. The guy had big land where a farmer was growing cotton and where had some oil excavations. They were nice people. 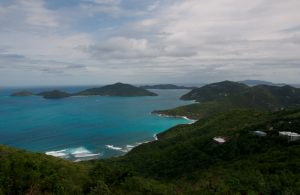 We also went to a hill (not a lot in these islands) where we could see the tons of little islands that are part of the Virgin Islands (american, british…), and of course the harbor with our “little boat”.

All these little islands had to accommodate their ports to this big cruises. Now they are digging even more in order to be able to have the “oasis of the seas” from Royal Caribbean.
Road Town, Virgin Islands
EveryTrail – Find the best