Google Earth just released a new edition of its desktop app which hikers, runners and cyclists are going to love. They call it Google Earth 5.2. I call it the Hike’s Edition. 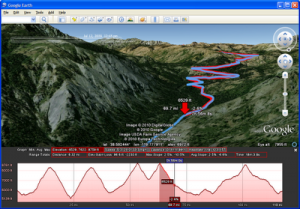 One of the new features allows you to recreate the path of a hike or bike ride by ingesting geo-data from one of your GPS devices. The visualizations show you the speed, elevation, and other stats from your hike, which you can see as an animation inside Google Earth.

If you collect other data about your trip, such as your heart rate or other body monitoring stats, those can be overlayed as a graph below at the bottom of the screen. I’d love to see an iPhone or Android fitness app that takes advantage of these new capabilities.

Another new feature in Google Earth is the ability to launch a regular Web browser from within the desktop app. Hopefully, that is the first step towards bringing Google Earth completely from the desktop to the Web. Otherwise, it might end up like Second Life.

Below is a video Google Earth product manager Peter Birch made of his bike ride to work.