Early this morning they announced that instead of stopping close by Playa del Carmen and take boats to the port (that was the plan), we were going to go to the island in front, Cozumel and stop in the port. We did, and we went down but seeing that to go anywhere we should take a cab, we decided to go back to the ship and spend the day in the swimming pool area, which is great and is where I am now. 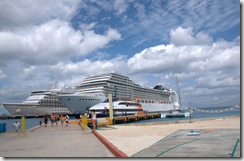 I bought a wi-fi connection at the ship, it costs 20usd for 60 minutes, but it is so slow, that I tried to upload the posts and I did not succeed, so I will try later using the web interface instead of this Windows Live Writer. I cannot access to my email at norai because uses port 8080….

We spent most of the day at the MSC poesia. It was good. We went to the deck 13 and took a seat on a table near the pool. Relaxing with amazing views. Nuria had a swim and I took some time to write on the laptop. With visits and all the activities they plan on board, you have little time to actually relax and type or read a book. I don’t know how many restaurants, bars, shops, disco and so are onboard. I am starting to know the ship now. I went to smoke a pipe to the Hitchcock room and to read a book while Kai and Nuria were having a siesta. We have walkie talkies to be in touch (of course… you know me…). Now there was a concert in the central area, there is the theatre later today and there is a huge screen in the pool area where there will be a film at 10pm. I have to check but I think there was a jazz concert in the zebra bar. Every morning they leave you a paper with the activities and offers. You can buy excursions, but we did not buy any, basically because we don’t feel we can do the sort of things they do with Kai: catamarans, snorkeling, etc… which is a real pity. Today for instance we would have gone diving, but… even if we do one dive each, I think it is too much to take a 11 week old baby in a small boat.

Tomorrow we’ll be arriving at Cayman Islands. Now, we are going to go to have a cocktail in the pool mohito bar probably and see the sun going down. I don’t know when I am going to be able to publish all these posts because the internet is not good enough for that.

Now for instance we are leaving Cozumel and I am in the balcony with the laptop. The sun is still up, a bit cloudy but the temperature is just perfect. It is a great experience to be outside in your own balcony with the sea by your side, the sun going down.