This morning we arrived at Montego Bay in Jamaica. The previous two days have been a bit of miss organization from the side of MSC. First it was supposed to stop in Playa del Carmen and not in Cozumel. Petty because playa del Carmen is a nice place and the place where it stopped in Cozumel was not nearby anything (beach or city) so you had to take a taxi, and honestly, with a baby and in an island, you might find enough taxis where the cruise stops, but if you go to a beach, who guarantees you that you will find a taxi then, specially when there were 2 cruises and both dropping 3000 people in such a small place? Well, a solution could have been to hire a car, but just to go to the beach and for a couple of hours it is a petty. We felt people were not happy about it. Specially those who had booked excursions and where cancelled.

Then in Cayman island (Georgetown) again. They claimed bad weather, so the cruise could not properly stop. It took like 4 hours to take everybody in little boats to Georgetown. 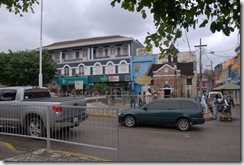 Today, the cruise stopped at the port, we went down and were surprised that all the buses downstairs (a lot of them) where charging people to get them to town. Strange, but OK we are happy to pay 5 dollars each for that.

We went to downtown and you could see that Montego Bay is like any other place in Africa. Underdeveloped, dirty and not safe. Before, and when I go on mission, I don’t care, but with a baby…. it is a different story. 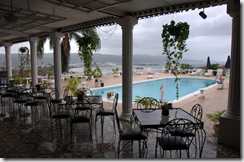 We walked a bit around downtown and were stopped several times by locals saying that we should now go beyond the couple of streets in downtown, as it is not safe. We decided to take a city tour with one of the tons of authorized drivers (JTB, Jamaica Tourism Board) who took us for an hour around Montego Bay, a very ugly city with NOTHING to see, a part from a nice old hotel on top of a hill with nice views. Plus the guy had no idea of anything. Anyway,the weather was not good either so no point in taking a taxi to the beaches so we decided to go to the ship. We had lunch in the 13 floor (buffet) in a table in the pool area with incredible views over the bay, and then we stayed until now in the pool area. Now I moved again to another table (facing the other side) and decided to write today’s and yesterday’s posts, even if I don’t se how and when I am going to be able to publish them, as the satellite internet is pretty slow, specially when uploading photos.

Now Nuria and Kai went to the room (Kai is hungry) and when they come we will enjoy a cocktail and try to connect to internet in order to try to check in with Iberia and the the right seats… which I doubt we will.