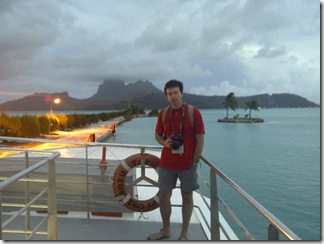 Rejane gave us a lift to the airport and there we waited with the Polynesian ladies who were in the same flight when we arrived wearing immaculate flower hats. As we wanted to go diving we thought it would be probably better to assure us a place for the following day.

So we phoned and we managed to book with Blue nui dive. The plane arrived a little bit late, we were so excited to fly to the pearl of the ocean… The 15 minute flight took us to the best located airport I have ever landed in. It is in a motu (small island) surrounded by turquoise water.

The lagoon ( it is 3 times larger that its land mass) is one of the most beautiful in the world, shading from turquoise to deep blue and its string of white sanded islets. In the islands you see the Mounts Otemanu and Pahia all covered in lush greens. Bora bora is the oldest of the Society islands (7 million years old). It is almost an atoll, a stage half way between the Tumamotu atolls(10-40 million years old) and high islands such as Tahiti (2 millions years).Its huge lagoon, bordered by a very wide reef is open in only one place, or pass.

Before the Europeans arrival the island was called Mai Te Pora which means created by the gods, the name evolved to Pora Pora and then Bora Bora.The islands first inhabitants arrived around the 9th century after a long trip across the Pacific

Upon arrival to the airport a shuttle boat take you to Vaitape, which is the main city in the island, were all the shops, banks and other important things are. We picked up our back bags and the truck-taxi to the hotel was waiting for us. In 10 minutes we arrived and checked in. For the first night there was not beach bungalow available so we stayed in a room on the second floor of the main building just in front of Matira beach. Then we decided to go for dinner, as I was starving. I had read in the guide that Saturday was the marvelous night at the Intercontinental which happened to be across the street. This consisted of a seafood buffet and a Polynesian show. So we exploded our budget with the superior dinner, I had 2 lobsters, 6 oysters, raw fish,huge mussels in Provencal sauce and then dessert. When I only had eyes, fingers and all my concentration dedicated to the lobster, dani brought to my attention the young Polynesian guy standing by my side with a flower necklace asking if I wanted to go with him and dance. I doubted for a few seconds, as my lobster was going to get cold, but only once in a life time I was going to be given a beautiful necklace just for ridiculasing  myself in front of all the posh guest at the Intercontinental, so I say, of course yes. After watching some of the other terrible dancers, the tiny piece of shyness I could have disappear, and after 10 minutes of dancing and laughing I returned to my table to finish my sweety. Delicious! I could not resist, I had to go for the second whole one ( not halves!!). Unfortunately I spent so much time dancing and eating that I was too late for the mango, well I had cake and strawberries instead. And then the terrible moment arrived, dani proposed the famous Sinpa or going without paying, and surely we should have done so, or maybe charge it to room 123, but we have lived for too long in Switzerland and become responsible and soon-to-be-broke citizens… So whoever is reading this, please consider inviting us for dinner in April as I think we are going to live on water and bread for a couple of months…

2 walks in Bora-Bora with GPS Garmin Oregon 300. Mose over to see the guest house where we stayed.