When we reached Georgetown in the Grand Cayman, we were supposed to leave the ship by 10 with boats. There were 2 other cruises and the sea was a bit moved. In fact the captain could not properly anchor and had to stay all day in the same spot using the engine. Plus the boats used to go to land were the ones of the cruise, little boats for 150 people, all packed. 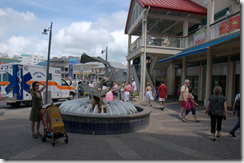 They distributed numbers and were calling. I think our turn came at 1.30pm and at 3pm was the last boat back to the cruise. Goood. Pretty bad organized. People complaining a lot. Probably they had local boats to help but with the other 2 big cruises there was not enough for all. Anyway, it was quite an experience to go in such a boat, with such a sea (it moved a lot) and with Kai. I would say it was interesting. Poor Kai did not complain at all. It was not very sunny but it was very hot. 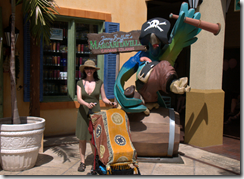 One thing I did not like from MSC (our cruise organizer) is that they don’t care about babies or disable people. You cue like anybody else, and in our way back it was killing us to cue under the sun. Kai was suffering so we kindly asked to go to the front of the cue.

Well, in Georgetown there was not much to see either. It is packed of shops with jewelry, diamonds and watches.

When I say packed is packed. We walked around but of course we did not have much time to do more due to the disembarking problems. I could not buy rum because they don’t allow you to buy food or drinks outside the ship… maybe I should ask if they can keep it at least until the last day.

All this places we are stopping by are great for diving. What a petty. We would have loved to dive, but looks like it won’t be this time. 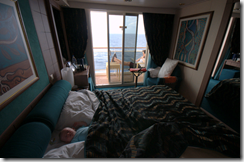 Well so we stayed most of the day on board, which honestly is not bad. Judge by the photos… it is better than a super hotel.
George Town, Cayman Islands, GPS Garmin Oregon 300. Mouse over the grey squares for more info.