We moved to a new house nearly two months ago. The house dates from 2003 so pretty new for our standards.

Of course we have a million thing to do, but here I want to focus on automation.

First is to do some research on home automation “domotique” here in France.

I chose z-wave as preferred protocol. Why? A lot of devices available, and one of the most extended. Far more than the Apple Home Kit that we are starting to see now. With z-wave the possibilities are endless. From pure automation to setting up an alarm system, irrigation system, thermostats, etc…

Then there are several options for a home center,  controllers or smart hubs:

I went for Vera: the UI7 is great. It does not need internet although it can be accessible from any browser, iPad, iPhone or android app, but the fact that it is internet independent is great. Also the one supporting more devices and from different protocols made me decide for this one.

The first thing I wanted to automate were the roller shutters or stores. They are electrical and I have 13 or them. If I remove the wall switch there were 3 cables, up, down and a line to the motor.

I decided to buy the Fibro FGRM-222. Be careful as the US and EU use different Z-Wave frequencies.

Basically you need a Neutral that I did not have, so you need to find the neutral of the motor.

We need to know:

This is what I had: 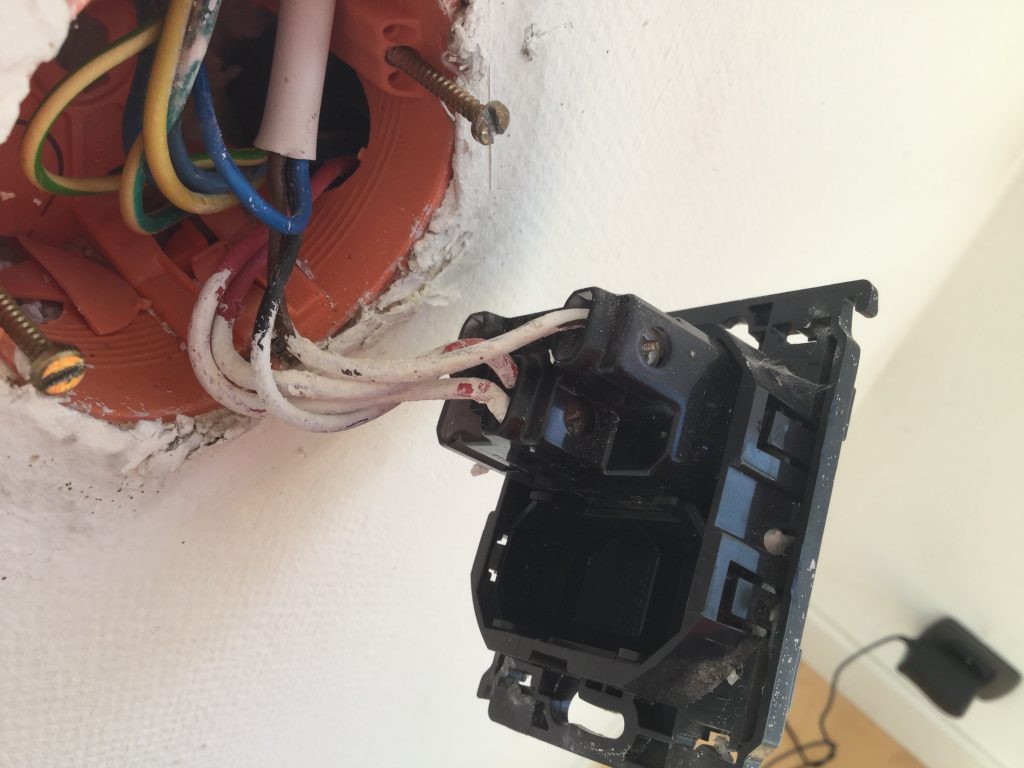 The switch has a back (up) and brown (down) line cables, and a third (two cables for this one) red. 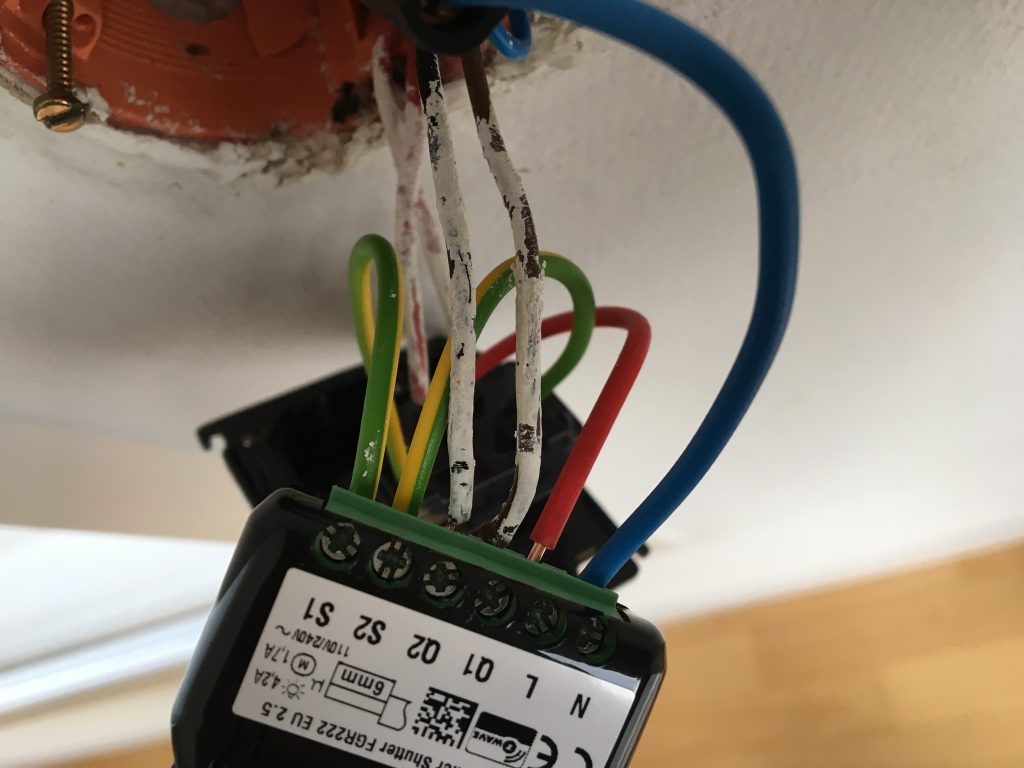 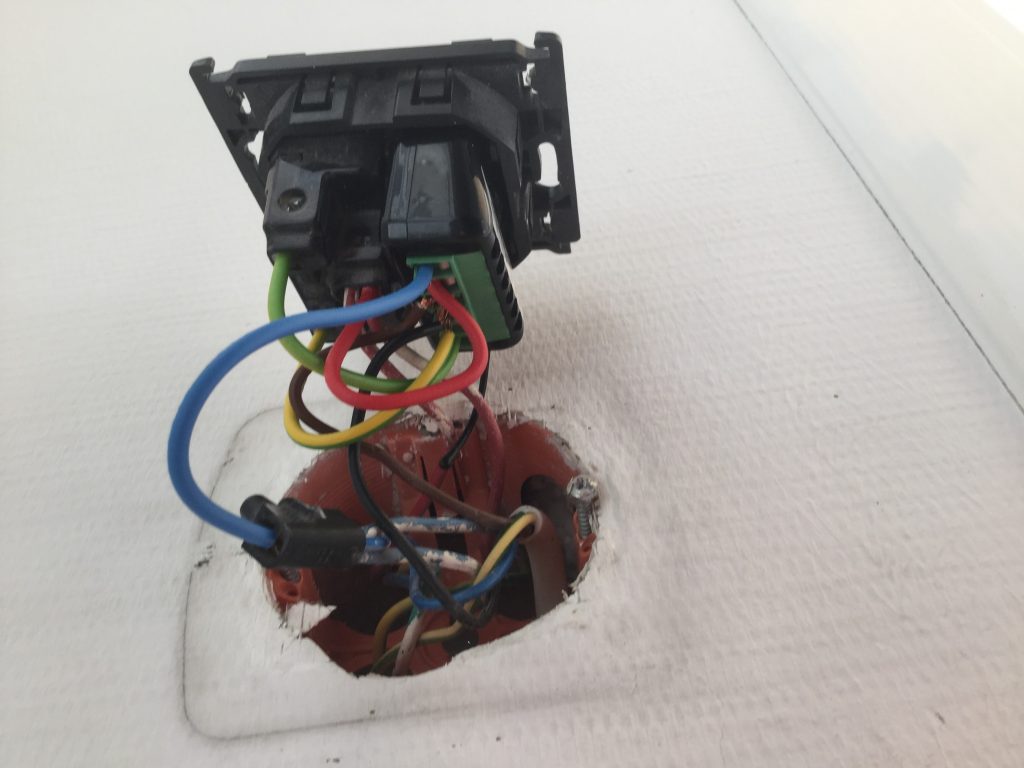 Now the Fibro needs electricity. We need to put the Line to where the other brown cable is, in between the switch. So from L in the Fibaro to the one closing the switch (we had two browns in the first photo).

Now in the hole we also see a blue cable: the Neutral. We put the N there.

Then you have to pair it to the Vera, which is a different article…

I have never had a swimming pool before so I had to understand how all the piping works. I might write about it one of these days.

The question is that we are approaching winter and I found out there are two types of hibernation, active and passive.

The previous owner told me they did the active. So same here. It is easier, more convenient and when you want to put it back on is very easy.
I called a company so I could learn how to do. Now I know. But I noticed that the clock controlling the pump was programe to run one hour out of two… that is 12 hours per day. Same as in summer… so expensive. They told me I should install a box “hors gel”, a device that takes the temperature and if the temperature goes below zero it forces the pump to work all time.

I decided to install one Fibaro FGS222 to control the pump with the Vera instad of buying one of these Coffrette Hors Gel. 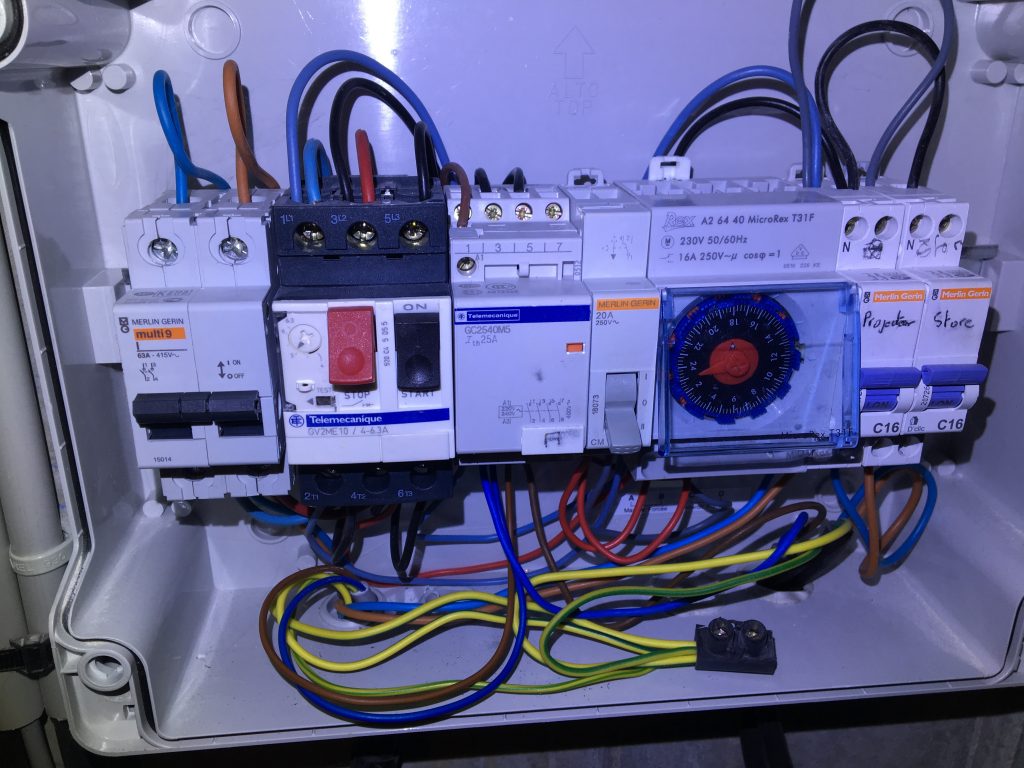 What it is important here is the clock and the one on the left with I, 0 and II. O pump is off. II pump runs with the timer. I pump is forced.

What I did is to buy a 10A disyuntor to protect the fibaro. Then the Fibro needs electricity. I take it from the Store disyuntor N on top (blue) and the red or brown (line) also on top. On the bottom two cable that will feed my fibaro on the Line and Neutral.

This is the result: 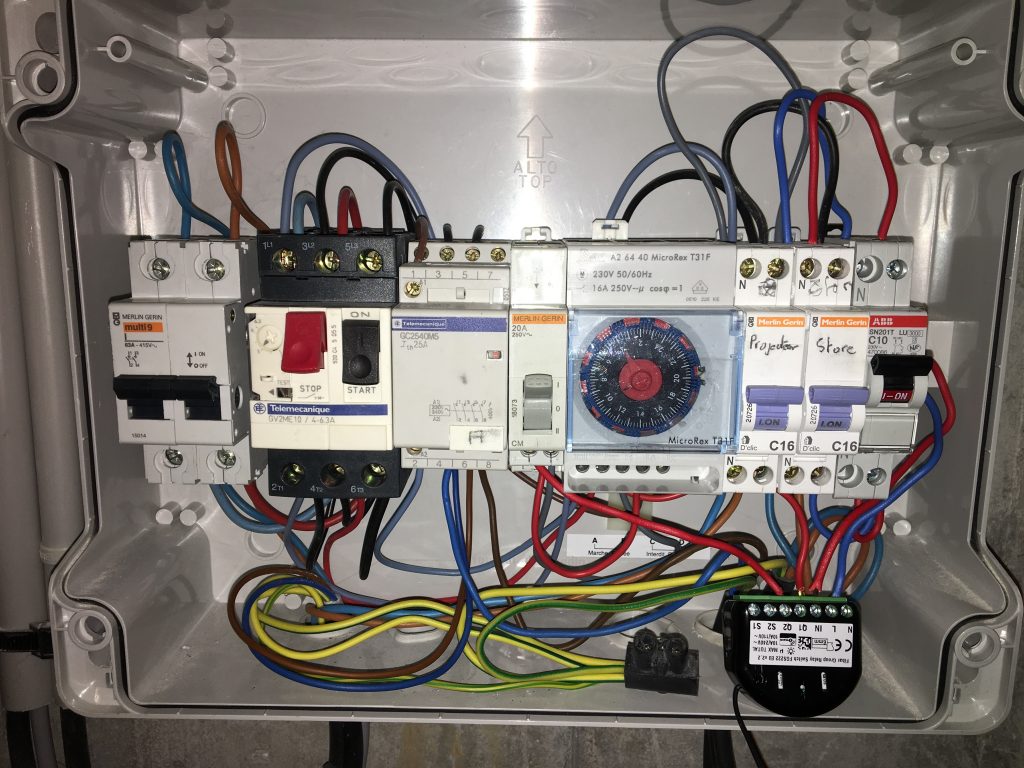 As you can see from the two devices that the fibaro can control I just use one. I have the Line and Neutral comping from the disyuntor (ABB) that is feeding from the one besides. Then I don’t care about the Switch S1 and S1 and I take from the one besides the clock, the one with 0, I, II I take the I the one that forces the pump to go, and I plug it to the Q2 and a new cable from the Q1 to where it was going in the clock.

Basically in the I forced switch I add a switch fibaro.

I take the outdoor temperature from a a weather all in my Vera or my Aeon external detectors.

I add it to the vera, and there I have 4 scenarios: 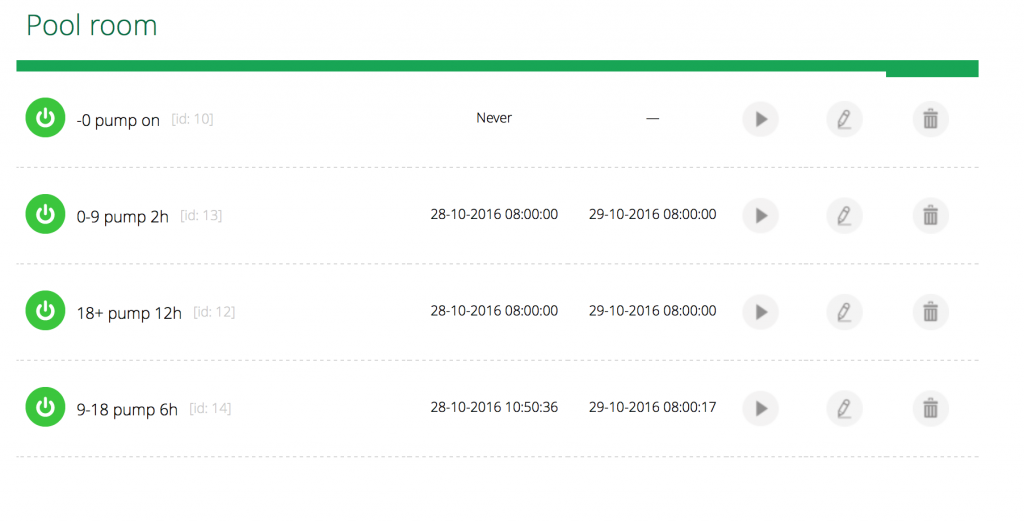 I needed some extra help with this so I contacted Vera.

Let me further explain how to create these scenarios.

Vera people told me that triggers use only the OR. Initially I programmed with 3 triggers, for example for the 0-9 it was above 0, below 9 and time at 9am… but because it was doing with OR any of those would trigger. 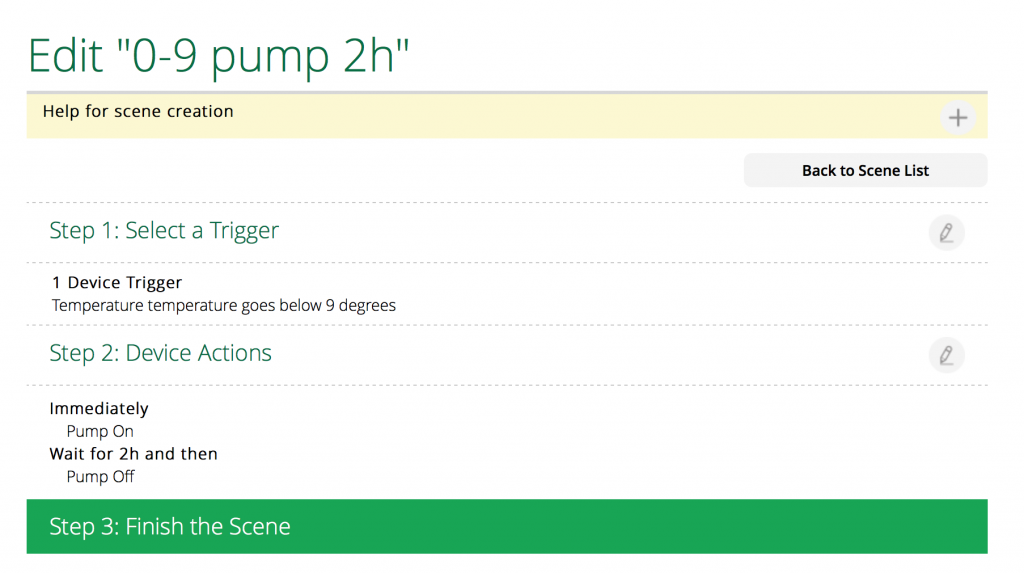 It just works. No need to keep changing the clock…. or put extra equipment.

EDIT: Finally I did not implement the pump management with Vera Scenes… it has some downsides: First there is no AND only OR. So not possible to be accurate and depending on time AND temperature turn it for X amount of time. The thing above is a workaround, far from perfect.  Second, to leave the pump with a Vera scene is not recommended because is not reliable. If you edit a scene or vera reboots or whatever the delayed action is lost.

Program Logic Event Generator (PLEG). A Vera app that should be what Vera Scenes are. Very powerful. I will write an article on how it works for my pool.

The problem is that when you pair a z-wave with your smart hub you can not use it elsewhere.

In my cases I have 3 Piper NV cameras which are my primary alarm system. I have like 9 Aeon z-wave door or window detectors, all connected to my Piper, not to the Vera.

What I did is to set up the Vera as my secondary alarm system. I bought a z-wave sire: Vision ZM1601EU. No problem to pair it with the Vera. Then I the weakness of most alarm systems is that if they are triggered… it is too late… intruders are in.

I wanted a perimeter alarm. I bought a couple of Aeon Labs Multisensor 6. These are outdoors movement sensors. Well they do other stuff such as temperature, UV, Luminosity, humidity… but movement and temperature are the main ones for me.

I can now activate the outdoor motion sensors when I am in away mode (of via the Vera app when I leave the house), and they can trigger the outdoor siren. Of course I can be notified.

I can also not trigger the alarm but be notified, take a look at one of the 6 cameras I have and if I see anything strange trigger the outdoor siren from my phone… and even my Piper’s.

I also have smoke and flood detectors on my Vera, but I would like to have more. For instance in the pool room, boiler room, etc…

Next is to control some lights, specially outdoor lights, and the portal I am going to install soon, where I will also install a ring.com.

I would love to manage the thermostat but I have a Frisquet that does not allow me to replace theirs by a Nest or similar… but it works perfect so no big deal.

Also to make more complex scenarios in the Vera, using geolocation of the phone. Examples:

Getting home, open car gate, turn on the lights… Home mode on Vera. Off alarm, etc…

In summer, X hours after sunrise, lower the blinds… etc.