The real causes of the economic crisis 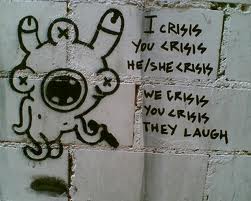 It is obvious we are living one of the biggest economic crisis of the history of the world as we know it, and it is far from over.
We have heard many complaining and writing about the causes and what has been done wrong: the america housing bubble, the banks, the debt… And we are now seeing countries struggling: Greece on the second bail out, Portugal, Spain…, and we hear the politicians trying to fight defaulting by cutting expenses, augmenting debt and going into austerity mode.

I have another point of view on the crisis:
The money is more or less like the energy. It cannot be destroyed it can only change hands. Well, the money can also be created.
When we decided to go for free trade we forgot something. I believe the main cause of this crisis lies here.
The free trade model with the WTO does not takes into consideration the movement of people, only goods and services. Let me elaborate:
The beginning is pricing. We consumers in a capitalist world are looking for the best quality at the cheapest price.
An entrepreneur therefore, if she/he wants to be competitive has to either find a niche product or market where margins can be bigger or/and manage to get her/his product/service at the cheapest price.
With free trade entrepreneurs have outsourced production to developing countries where labour is cheaper. This has been good for the entrepreneur and for the developing country, and even for us consumers because we paid less for the end product… but…. this means that jobs are lost towards this other countries.
It is true that those loosing the jobs could move up the value chain and do something else with more value. The pie grows, at least this is the assumption.
Back to free trade. When moving production of this entrepreneur to a cheaper and efficient country we have not moved the person who was doing the job here. This person has to do/learn something else.
Theoretically if there was free movement of people as we have free movement of goods and services we would end up in a world clustered with regions or countries that are very good at one/few things doing those things only and everybody there being the best in the world at doing those things. In a way this happens even without free movement of people because we learn.
The problem with this is that we become very vulnerable as we depend entirely on trade and we are not self-sufficient.
An exception is food. Countries protect their food and agricultural sectors probably because of this fear. This is why the US, the EU and most of the countries in a way spend such large amounts of money in subsidies even if they know it would be more efficient to buy these items from cheaper countries. In the WTO a lot of the disputes and part of the reason why Doha failed is because of agricultural issues and subsidies.
So what happens? In our developed countries there are fewer and fewer jobs and the wealth is concentrated in fewer successful people and companies (remember the energy comparison).
Developing countries who benefited from this free trade are now consumer countries (We have also benefited by buying cheap). This rich people in our countries knew this would happen and now they are well established to sell their products and services there too. May be now switching production to an even cheaper country.
In theory all this is good: we buy cheap, entrepreneurs have more money and we help other countries to increase their middle class, but there is a big but. Is the pie big enough?
Wealth is partly spreading to this countries that are now consumers as well. Is the earth big enough for all of us driving cars and eating fish at 1000 km of the sea and fruits out of season?. I don’t think so.
This scenario it is not sustainable. We humans are really a plague.
Developed countries can have salaries 100 times higher than developing countries and now are competing with us at the same level…. In principle income should trend to converge with time.
So yes bank mismanagement, speculation, housing bubbles,… are contributors sure, but as I said I believe there are deeper fundamental issues.
What can be done then?
Governments should not focus on the consequences but on the root of the problem, and the problem is employment.
They should do everything to boost job creation: encouraging and facilitating entrepreneurship, aiming at being a better option for companies to stay local, by relaxing taxes, facilitating work permits, training, providing a competitive environment without subsidies.
What can we do? Expect we cannot earn the same if in other places for the same job they are paid 100 times less.
This should hopefully drop prices too or make some of us consider moving to where our skills are more valuable and cost of life cheaper.
Now for those very very rich, it is going to be difficult. The money is the power, and with money they can buy lawyers, patents and do whatever to stay on the edge. Regulation and government should then closely monitor and regulate the limits, specially after the atrocities done by the banking sector.

Most of us are like kettle. We go with the flow. There are few celebrities/leaders/entrepreneurs we follow. These include the rich who employ us, but who controls their ambition? The right laws and the governments.

What is going to happen?
I don’t know. Riots in London, disruptions in poorer districts, people defaulting payments, banks absorbing this defaults, government printing more money, countries not trusting the US money, EU bailing out Spain and others, or dissolving single currency… all this here. In the developing world? well, learning to leave without us. Us becoming the old economy, they becoming the new pole of the economy.

Note that I believe that free trade is good. It is fundamental to boost productivity and efficiency, it is just that is more complex than we believe, and it has been proven that as it is, it does not work very well.

This are just some thoughts I am writing from my iPad. I would love to see a discussion on the comments…