Nairobi. I am posting this from Monrovia in Liberia because I had no internet in Nairobi.
I arrived on Thursday, pretty late at night. There was a guy waiting for me. I had no problems to get into the country without visa with the Laisser-Passer.
The hotel was a bit crappy but OK.
On Friday when I woke up I went and have breakfast. Owen and Isaac came around 9am when we left to the Export Promotion Council. We had meetings all day. Eventually Mr Matanga (responsible for EPC) took us for lunch to the Intercontinental Hotel, then we went to the ministry of Trade.
I remembered I had been there before when I came for the WTO meeting. We met the PS (Prime Secretary) of the Ministry of Trade. Simone (a colleague from the the ITC) was also meeting the PS for the Ethical Fashion project.
We exposed our methodology and we are in. They want us to starts asap. The earliest we can start is September. They did not want to create a new body to oversee the process of the National Export Strategy development. The task will be managed by EPC which has a 50% representation of the private sector.
Anyway, I don’t want to go into work details. I had no chance to see Nairobi. Work only. Until late.
As an anecdote, I would say that in London there was a group of people with a guide. The guide was traveling with them from London, and yeap, they were also traveling in Business… they were going for a safari… nice! 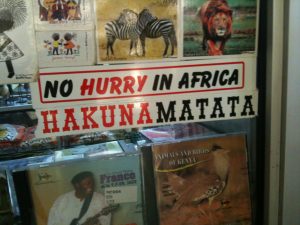