Drupal Mavens Unveil Open Atrium: An Intranet in a Box

Proprietary intranet vendors, be scared. Be very scared. Today,Development Seed, the open source shop behind DrupalCon in DC and other endeavors, has released the public beta of Open Atrium.

Open Atrium is a free and open source intranet built as a Drupal distribution, with some impressive functionality available out of the box. Not only is this a solid piece of software to begin with, but its makers are evangelizing what they think could be a transformative paradigm for extending Drupal’s capabilities.

Development Seed has been around for about six years, and in that time they’ve built Drupal-based websites and intranets for the likes of the UN and the World Bank, among many others. Eventually they thought to themselves, why not put together this intranet as a separate distribution? Something extensible that could be deployed at lightning speed?

In addition to being a well-constructed Drupal distro, the software is neatly packaged with an array of useful features for internal collaboration. There are blogs, wikis, a calendar, to-do lists, a ticketing system, and a microblogging tool called the Shoutbox. To aggregate the activity from these various parts, there’s a group dashboard.

Oh, and did I mention that it is multilingual too? As a team that first met while working together in Peru, internationalism is a big goal for Atrium. To my knowledge, the only mature intranet to seriously support both English and other tongues is ThoughtFarmer. (Canadians and their French, eh?) 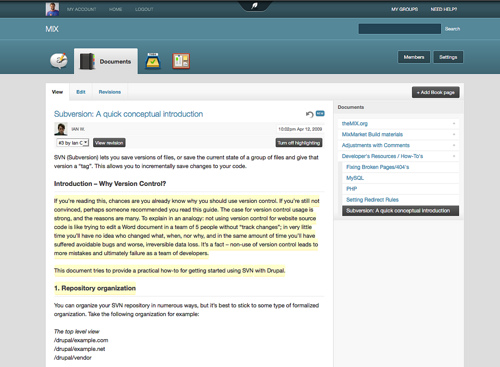 In addition to the built-in functionality, developers can create their own features with relative ease. These features are not just new aspects to the software, but are actually a kind of meta-module, as described by Eric Gundersen of Development Seed in a phone conversation with ReadWriteWeb.

Feature can be released on their own basis or served through a dedicated features server. The real goal behind them is to “make niche [use cases] work,” according to Gundersen. With virtually any features addition to Atrium able to be shared with others, Development Seed hopes that a healthy App Store-like ecosystem will develop that can “turn this in to an exciting business model” for themselves and other developers.

Speaking with Gundersen, you can tell Development Seed has a serious expertise and passion for open source development, and it really shows in Open Atrium. It may not integrate with your legacy apps or be offered by a big enterprise vendor, but from where we’re sitting Open Atrium stacks up very well compared to any proprietary intranet software.