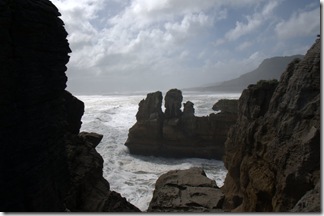 We overslept, ummmmmm that was nice, warm and with a shower at night and in the morning, so different to the cold hut!! At 9.30 we were driving direction to Kaikourua when I decided to phone just to check if we could advance our booked tour a few hours. Surprise surprise, all day tours had been cancelled because of bad weather, the following day was going to be the same, so U turn to the West Coast. We were just a mere 700 km away from the Franz Joseph glacier, and given the windy roads, that could take the whole day. We said, let’s keep moving and we will see where we get. So back again on the same road but in different directions, leaving behind the wineries with that fantastic Cabernet Sauvignon. We were heading to Westport, on the west coast ( the europeans who named these cities did not have much imagination). On its way we traversed the Buller Gorge, with the impressive Buller river snaking around. Then direction to Punakaiki where the famous Pancakes rocks and Blowholes are our GPS decided to get seriously mad. As Dani drives, it is the copilot who tries to understand the map ( I am not very good with directions) and reads the road signals and follows the GPS. So following the map and my common sense I said to dani,next road to the left, and the GPS said to the right, ummmmmmm!!! Weird!! We continued a little bit, I entered the name of the village twice and tried to see what it said. Again, asking for a u turn and continue for another 200 km for the place that was just 40 km away. We pulled over and dani (the expert) had a look. We were on the correct road, the GPS wanted us to give us a huge detour around, as if we were not driving enough, we have so far driven 3300 km!!

Well finally on the right track we arrived to Punakaiki and went pass the city (the three houses) and directly to the main attraction. A 20 minutes tour take you around the coast to see very closely these rocks, which not even the geologists can determine how they were formed. They look exactly like thick pancakes piled up. The explanation was a little bit complicated to write here but basically over the last 100.000 years they have been formed due to the characteristics of the dolomite rock and the action of the tectonic plates underneath. In any case, they are a beautiful phenomenon to admire. Dani took at least 100 pictures, so I guess that one or two will be really good. After a quick snack at the Wild Cafe there we continued our trip down to, Greymouth, Hokitika and finally the Franz Joseph village. For a while we thought that this time we were going to sleep in the car, as all the places where I phoned were fully booked and when I finally found one with a double the connection failed due to poor network. And for the next 100 km no big villages so no network. I kept on trying and finally Montrose Backpacker answer and I booked.

Trying to connect to the internet, with the 2 free computers that are available I met Raul, from Erandio (Bizkaia) who is also travelling around with Lourdes from Santutxu (Bilbao, Bizkaia). What a coincidence!! THey also have a blog: nosgustapasear/blog and something else I have not retained, but we will check it out in Google.