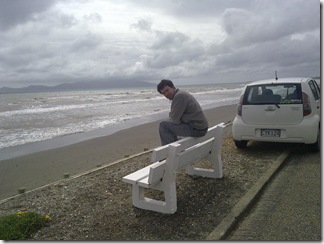 Mordor of the Lord of the Rings, the three volcanoes together, the emerald lake and amazing scenery. The lonely planet recommended to do this tramping in one day, exhausting, but we were well prepared with our latest acquisition in Taupo: our Keen sandals, similar to Teva but with a weirder look. This trekking was the other only thing I wanted to do in the North Island together with the diving in Tutukaka, well so guess what, before it was tutu kaka and this time is Tongariro, Tururu! Since Wednesday the weather had not been very good, and actually Thursday while we were in the Coromandel it was pretty terrible. So Friday stopped raining when we left Rotorua, but in Taupo they already told us that Saturday was not going to be good for the Crossing. We headed to the national park and realized that visibility was probably about 10 meters, so not good. The night at the Skotel hotel was one of the best ones. This morning we got up full of energy for the trekking, but it was raining and visibility was nil. We went to the visitor center to enquiry about possibilities and hear and accept the inevitable. It was not advisable to do the crossing and definitely not worth it as we will not be able to do anything. The guide said that Sunday was not going to be better, so morally destroyed for the bad luck we decided to give it a miss and go to Wellington, which is a 4 hours drive alongside the Wanganui river, the longest in NZ. The rally driver was again happy to drive in this mountain roads like one of the locals, who were so impressed with his driving that gave us way to overtake them… In one of the turns a guide in the shoulder road tells us with mimics to slow down, and we did so, just in time to avoid driving over a group of sheeps that were crossing the road. 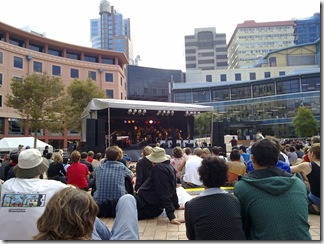 Some 40 km away from Wellington we found the Kapiti coast so we decided to stop for lunch at Paraparaumo, but the beach was not actually that beautiful so we continued another 15 km to the following nice beach and had a sandwich in front of the sea, with the seagulls waiting for some crumbs.

We found the hotel, and it is again a good choice, I am quite good selecting places to sleep now. This is an old typical house quite close to the city center, with a huge wooden terrace in the entrance and our room ( which was the last one left) looks like it was originally the garage. We left our bags, changed clothes, as there is sun here!!! and went to Cuba street where all the shops and bars are. We followed the walking circuit in the guide and arrived to the civic center where there was a jazz concert as we are in the Wellington Jazz week! So we sat and listened for a while, then continued our walk to stop for the summer ale and the Marlborough Chardonnay in a nice terrace. At 7 we were already starving and found a Japanese which looked good. We had the sushi and sashimi combo and then beef teriyaki and been tepanyaki set ( which came with salad, rice and miso soup, ummmmmmmmm, delicious!! Even better than .

Now I cannot move, I ate too much, so I am going to bed, tomorrow alarm clock at 6 am…