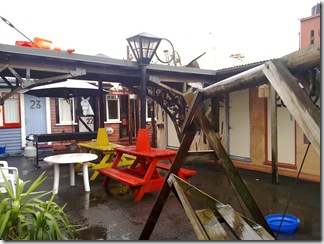 We woke up in the western environment of the cactus backpackers. Our little room was in a patio and the whole hostel was old but cool. We meet some people while having dinner. An Australian guy with an incredible accent and some other.

The weather was crap. It has been crap all day. Raining non-stop. So what to do? No sky dive as we would have liked. We walked around Rotorua and then headed to Te Puia, a Maori thermal reserve. The scenery is unusual. From the car park you start smelling this typical smell from the geysers and hot springs. You approach and you see a forest that looks like it is burning. Even with the rain it looked like burning in dozens of places, but it is just steam.

There was a typical Maori representation and we walked around until about 2pm. After having seen very unusual road signs like ducks crossing, cows crossing, kiwis, we finally saw one kiwi!! Our first encounter with NZ national mascot. It was confined to some 40 square meters, but there it was, in front of us looking for something to eat in the soil. It is a very different bird, more like a mammal than a bird. 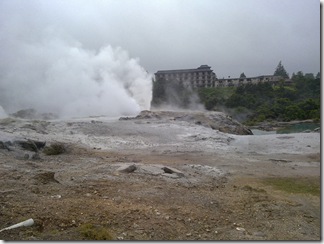 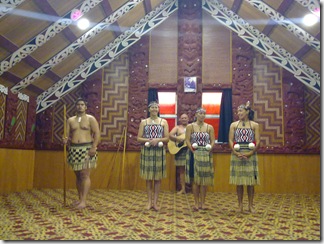 WIth the kiwi in mind, we headed towards Taupo where we actually wanted to do the sky diving. It has a huge lake. The biggest lake in the north island. We walked around. Looks like tomorrow they have the ironman competition. It was very busy and crowded. Even if it was raining all times.

We went to see the Huka falls, a very nice waterfall with an incredible amount of water, and then later on we drove to Tongariro National Park. We stopped before to a “save’n pack” to buy some meat and wine for dinner tonight. We also stopped at a i-site information spot to ask whether or not it was worth it to make the Tongariro alpine crossing tomorrow as the weather is really bad and visibility is zero. They told us no. Not worth it. This breaks our plans. 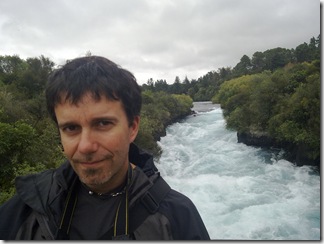 We are now at the highest backpackers of New Zealand, in Skotel Apline Resort in Whakapapa and we just had a jacuzzi after a nice steak with salad and wine. All backpacker hostels have kitchen, for those who do not know 😉 The fact is that to me the alpine crossing is one of the best one day trekking in this country (18 Km) in around 7 hours, we should take a bus in one end and another in the other end or the car in one end and the bus in the other.  The information i-site here opens at 8am which is too late, as we should start walking at 7am, but there is no point in walking if it does not stop raining and the visibility improves…. otherwise it is a waste. They say that this is the most beautiful one day trekking of New Zealand. There are 3 volcanoes. The ones from the Lord of the Rings.  If cannot do it tomorrow, there is not much to do here, and that would postpone our trip to the south island with no guarantees that the weather would be better on Sunday…. Sunday was the day we have planned to take the ferry from Wellington to the South Island. We want to spend only one week in the north one, and the rest in the south. Everybody agrees that the south one is astonishing.