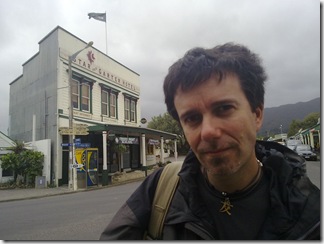 We got up in Thames prepared to go around the Coromandel Peninsula with more than enough time to arrive in Rotorua by mid afternoon. Well, we miscalculated the time and did not consider the roads. The day was very grey, not a single spot of sky was to be seen in the whole day, what is even worst it started raining after lunch. I have to say that Mr. Dani Loewe ( for the french rally champion) enjoyed very much the driving. He tried to put backwards gear instead of second gear at least 5 times and excuses himself saying that if everything in the car was on the other side, why the gears follow the same model!! Our first stop was in Coromandel Town which looks pretty much like Thames, but it is smaller and with more heritage buildings, western style from 1873. We bought the original smoked mussels, the ones with garlic, smoked tuna, smoked mackerel and another smocked fish I cannot remember the name but was equally tasty. We snaked around the peninsula and skipped the far North only because we had had more than enough of unsealed roads and we did not want to spend the day driving. 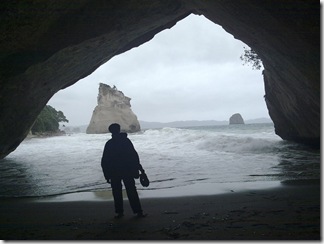 So we went direction Whitianga to pass by before the Otama and Opito beaches which are meant to be extremely wide. Well, they are, but with rain and 25 nodes wind, they look somehow very much different compared to the pretty pictures in the shops. Then to Cathedral Cave and Hot Water Beaches. Cathedral Cave was amazing, a cave in the rock, by the beach with the sea entering in this enormous cave from both sides, very pretty. The next stop was this beach were you can dig a hole in the beach and have your own personal spa. There are hotsprings at temperatures of around 60 degrees, from a spent volcano that left a flow of lava underneath. Well, the theory very nice, the practice is that the tide was high so we could not reach the place, the wind was blowing us off to the outer space and rain was threatening to make an appearance. We walked around the beach taking photos of the angry sea and then go for lunch to taste local food and what is even better local wines and beer. I am enjoying very much the NZ Chardonnay. After the fantastic Apple pie with a ristreto for dani and energy tea for me at the cool Hot Waves Cafe we went down to Waihi to drive through the Karangahake Gorge which is one of the best drives in NZ. Maybe, but the weather was not accompanying it, as it was raining and could not appreciate the scenery. And then to Rototua, 143 km more. Dani nearly had a heart attack, as it was already 5.30 and given the windy roads we only arrived at 8.00 pm.

The Cactus Jack lodge is a fun place, thematic ( western) and with interesting people. We met an aussy with a very strong accent, and another  one with a nearly perfect British accent because, he said, that his parents did not want him to learn the bad things in NZ. Well for me, accent is part of your culture and you should never be ashamed of, even when you say Bonjour and they ask you from what part of Spain you are from.