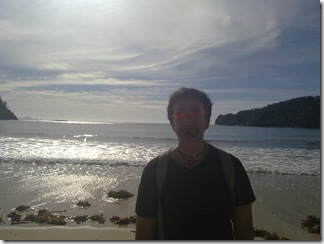 After a chilly night at Tutukaka holiday park, we woke up for a shower. Me, hating getting up early in the morning, could not see the machine to enter the 50 cents coin to have the 7 minutes hot shower, so I had a quick cold shower. We went to the diving center to check if it was ok for the day, but surprise, even being 7.45 in the morning we were told that it was fully booked. We could either find something else, but this was the only diving center in the area or wait until 8.30 to see if there were any cancellations. The lady was not very nice, I think, and she did not like us cause dani asked her straight away when she said that it was full, where we could find another operator. Anyway we waited patiently until 8.45, and then she came to tell us that unfortunately it was not possible, so we talked for 5 minutes, I confirmed my opinion about her other possible job in the red district in Amsterdam, and we left.

We continued our trip for 1 hour and a half to arrive to the famous Bay of Islands and we decided to go for a cruise, but being our unlicky day, it was too late for that, so either we waited for the half day one, not that good or the following day. We looked at different options and dani found another very attractive one, which was a 22 hour cruise with over night and fishing included. Obviously it was full for today, tomorrow and only available on Wednesday, way too late for us.. Too bad we had to continue… 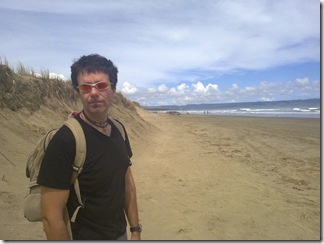 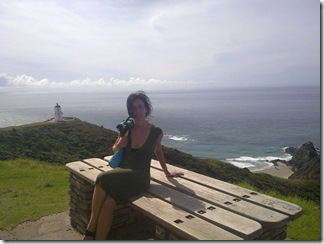 We headed north to Cape Reinga, the place where the Ocean and the Tasman Sea collide and sometimes 10 m high waves are formed. It is as well a sacred place in Maori as this is where the spirits go to the everafter. The road there is terrible, no sealed, which means for us, no road, just grave and loads of stones. So that is why our rented car is full of tiny spots where the painting has come off and it is all rusty. And the road officer who signaled the speed limits was called Fitipaldi in NZ. In these kind of roads you cannot overpass 100 km/hour. Obviously if you go over 50 Km/h you seriously risk your life. Any way we arrived to the peninsula and stopped first in 90 miles beach. which in reality is 90 km beach, but still quite a long one. If you do not have a rental car you can go north by the beach, but at your own risk as I read that you can see cars that were swallow by the sand… We continued through the fantastic road and we eventually reached the end. It was worth it, so nice views. You can also see the Three kings islands, funny name but it was because they were discovered on the 6 January.

After the twilight we went back and stopped in the giant sand dunes. Amazing! It reminded very much the mountaineering skiing, when you have to go up a terribly steep slope and you think you are going to slide backwards at any moment. It was good fun, specially trying to slide down with my bottom on dani’s shoes. ( He was not wearing them).

Dani also realised that some of the photos he was taking with the nikon were overexposed and suddenly he understood why (now dani writing): After nearly 20 days of travel I realised that if I leave the bracketing on, it will not only use it when I want but always. That means that 2/3 of the photos I took when not resetting bracketing are not well exposed. I am so mad at myself!!! At least I found the problem with 1 month of trip ahead… Also I have to say that I have driven about 750km in just two days…

We returned via the same road, though this time it seemed that it was a perfect line, who knows… The cows, sheeps and birds were in the same places. We went to a very nice village passed Doubtfull Bay, Whangarei, where we found a nice Lodge to sleep, Sunseeker lodge. The lady who picked up the phone asked me something with the NZ accent imposible to uderstand : do you have a babyhi car?? WHATTTTTTTTTT?? DO not worry , I guess it is no. She is the kindest woman I have met so far in NZ, really helpful and nice. She even asked her son to phone Luke’s cafe to make sure it was open for us for dinner. The dinner there good and the drinks from the bar next door as well, with again a very kind old lady.