Tour around Tahiti and fly again! 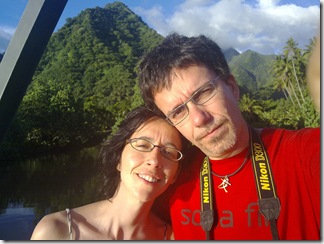 We woke up early. The sun was getting into our hobbit bungalow. In front of the bed we had a huge glass with incredible views. The roof of the bungalow was like a boat upside down, with the peculiarity of having plants and grass on the roof. Nothing was symmetric. We had breakfast. We had still some stuff we bought the day before in a champion supermarket. We wanted to get up early (and we did) because at 2.30 pm we had to be in the airport, give the car back and take the flight to New Zealand. We left Vanira at 7.15am and we started our trip around the island, stopping at many places. 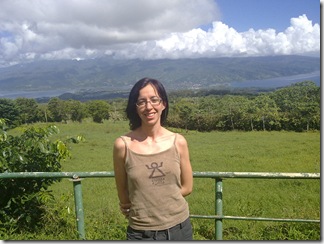 First (and following Karin’s advise) we went to the mountain in the iti island to see the views over the main island. Tahiti is the biggest of the islands in the French Polynesia. It is also like the Reunion island: a paradise for randonees. There are tons of valleys and rivers, waterfalls and the surroundings are beautiful! There are no nice beaches though. Only long rocky beaches with big waves where they do surf. The one we visited yesterday was famous but the water was 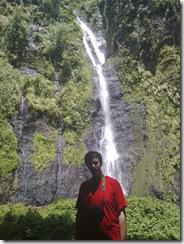 pretty flat. The waves where now in the north east. We sat and watch the surfers for a while, while eating some peanuts.

We mange to be on time at the airport. Before that we stopped in Papeete because Nuria wanted to buy a perl. She bought it. Certified and very nice. I will post a photo when I can. We also bought a crappy one in the street market for me, for a fraction of the price, but I’m happy! Now we both have a perl.

We arrived at the ariport around 2.30pm, gave the car back and cued for hours to check in. So slow these guys!

Now, the day after, we have lost one day!!! yesterday it was 27 for us now is 1st of March. Incredible. We took the plane to Auckland and we watch movies and movies and movies. This I will blog later on today’s post.