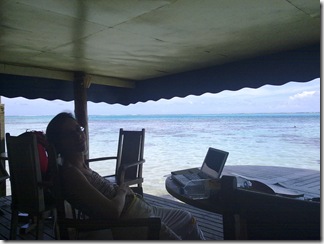 Thursday and today is our last day in Moorea. At 10am we have to leave Motu Iti bungalow and before 9 we have to give back the car. We asked the lady of the house if she could arrange transport to the airport and she did. 1.35pm and flight is leaving at 2.20pm. So we have until 10am to enjoy the quietness of our bungalow and from 10 to 13.30 to sit down in the on-water terrace to write the blog. 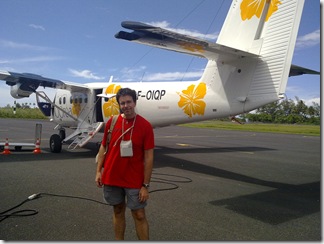 First thing we drove to where we rented the car. In addition the the negotiated price and the 3 entries to the tiki village the previous day, we also got a voucher for a free perl in the shop around the corner. So we went and got it. The lady drove us back to Motu Iti and we packed, paied and moved to the terrace to write the blog. 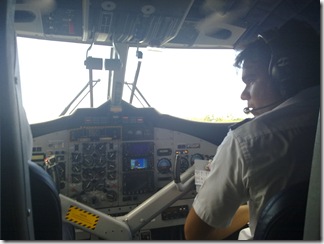 At 1.25 the guy with the van came, with 4 other tourists and dropped us at the airport. Only us, probably he was taking the other guys around. At the airport, which can not be called airport… we saw Desiree, the nice lady from Air Tahiti that helped us with Steve for the lost bags from Steve. Looked like they had little faith in finding them. Poor Steve. He had a bible with 20 years of annotations in it… We waited a bit and then a little plane, very very very small from air Moorea, came. We had nearly a private flight (of 10 minutes because Tahiti is very close by). We were 4 in a plane of 20. It was quite an experience. Of course we saw the cabin (we sat in the first raw).

Once we landed in Tahiti we realized that we were in the domestic terminal. Smaller than our flat. We walked to the main terminal (50 meters) and went asked where was the car rental section. We rented from a local company, Daniel rental. They gave us a peugeot 107, 4 doors and air conditioned. Nice car!! Tahiti is more expensive than her islands. We paid around 8.400 (I’m not sure now). The plan was to give a tour around the islands. Tahiti are two islands, and the south one is nicer and smaller than the other one. They are linked by road. The whole tour is around 160km and we wanted to go to the south island, west coast where the Vanira Lodge was located. Remember that we blogged about the Vanira lodge before. We never confirmed the booking with them because as you might remember (if you have been following us) we improvised on the routing we did in the French Polynesia. Anyway, we reached the Vanira lounge by 5. Traffic was pretty awful around Papeete. The property of this vanira lodge is astonishing. Incredible surroundings and views. Unfortunately the Karine was not there. Her husband (who built the bungalows) told us that she was having her dancing lessons and she was going to come back in an hour, so we took the car and went to the end of the road of the west side of tahiti iti (iti is small) to see where the billabong surfing championship is done. Now the see was pretty flat, but there is where you get the famous kumbaia wave. We saw the sun going down there. Beautiful. Then we drove back to Vanira (5 minutes) and there she was. Nuria made the arrangements while I went up to the bungalow to take pictures with the nikon of the end of the sunset.

The bungalow are ART. Every little detail is taken into account. All different. All beautiful. Ours was like a hobbit bungalow, a dream bungalow with views over the ocean. I have no words. I will try to put a photo but they are in the nikon and now I am writting this from Auckland from the Aspen Lodge and I want to buy some internet to post it and we are supposed to pick up the car now at jucy. I can always go back to the post and edit it.

The day ended with us going out with the car to buy some take away food at a place 1 km away from Vanira and eating in the terrace of our bungalow. Beautiful.