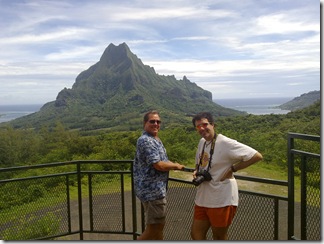 Wednesday, we woke up at our great bungalow seeing the lagoon. I wish we could wake up with the sound of the sea more often 😉

We had our succulent breakfast on the terrace watching the waves breaking far away. We had bought loads of different things in the supermarket, so actually the 90 minutes walk was worth it. Like the stressed Europeans we are, we were ready for the rental car at 8.00, though it had to arrive at 8.30. But this is Tahiti and its islands, so time notion is very relaxed. It arrived at 8.55 and we went to the rental place to pay. We had to negotiate a bit to get the ac car at 7000 francs, which we thought it was a good deal, as in the paper it  said the cost was 9000. We also got for free the entrance fee to the Tiki Village ( which was 1500 francs per person). All set and without any control from the car rental company (Albert rentals) we left to pick up our new friend Steve, the Californian. He met the owner of a very fancy hotel when he was cruising the Marqueses and the Tuamotu for 1 month. This guy also knew the manager of a very good hotel in Moorea, the Pearl Beach Moorea Resort and Steve got an upgrade to a bungalow on the water, so he was extremely happy about it and wanted to show it to us on the way back.

So we started our tour around the island (62-km circle road) going up to the Belvedere view point, which is probably one of the most spectacular panoramas in the world. It has impressive views of the Cook’s and Opunohu (which is actually the one where Cook anchored in 1777) Bays and the mount Rotui (the sacred mountain of Ancient Polynesians) in between. We stayed admiring the views for a while and then went down the road to stop in Marae Afareaitu which is the oldest in Moorea and dates back to year 900. This one was bigger and better preserved that the ones we saw in Huahine. I also heard that the  Polynesian  islands were populated by navigators who  arrived in large double outrigger canoes from Southeast Asia1000 years ago. They formed a triangle between the Polynesian islands, Hawaii, and New Zealand, and that is why the culture, songs and even language are similar. We visited the Marae and served as a succulent lunch to the mosquitos smiling and welcoming us. 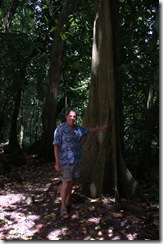 Next stop was the Agricultural college where we could visit the plantations. The tour lasted for 2 hours and it was too hot to walk, so we read the first 10 trees and we went straight to the pineapple plantation. The plants are some 80 cm tall and the pineapple is in the middle. They were quite small, but with a very sweet taste. Then we continued along the circle road trying to find a nice place to eat, but it is so small we reached the Tiki VIllage that was going to be our next stop.

In the village we saw the Ahima’a or underground oven where they cook the food for 4 hours. We were also shown different fruits and vegetable like the uru or bread fruit, papaya, starfruit, mangoes, the plantan banana which is to be cooked and others I cannot remember.  We got an explanation about the Monoi de Tahiti which is obtained by macerating Tiare blossoms in refined coconut oil. 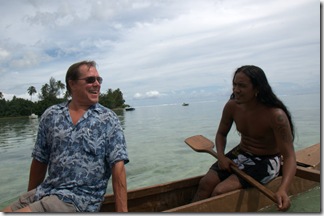 The flower is used fresh and macerated in refined coprah oil for a minimum of 10 days. We stopped at the theatre to watch the show with Polynesian dances, the best so far. and then we went to the pearl farm with a canoe just to show us the process, as the real farms are in the Gambiers and Tuamotu islands because here it rains and that affects the salinity degree of the water so it is not suitable for the culture. 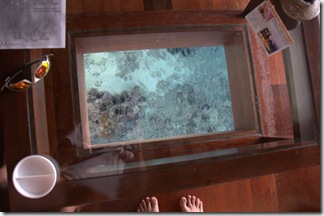 We continued to the south of the island looking for the mysterious Afareaitu waterfalls, that we never watched, though we tried really hard, risking the underside of our car as the road that leads to them was used for the last time probably months ago, given the size of the bushes on the 2 m road…

Never mind, we saw other nice views and on the east side of the island you can see Tahiti. 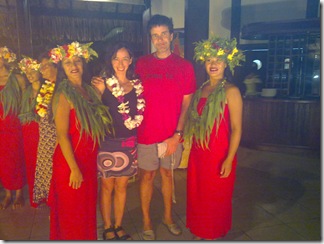 At 6pm Steve invited to his bungalow to have some rum with Rotui mango juice that we bought previously in the supermarket. The bungalow was spectacular, with a glass on the floor to watch the coral and the fishes. We did some snorkel and then after a very nice conversation we went for dinner and to watch the Polynesian show where I got  another flower necklace. We had the tourist dinner with a tuna tartare that 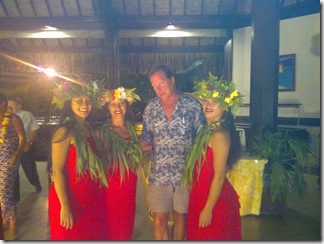 was in my opinion delicious.  The waiters came at least 4 times to ask Steve wether he had finished, the poor thing had to rush to eat his tartare so they could bring us the beef… We were the last ones in the restaurant when we left and the waitress smiled very much when we finally wet back to Steve’s for a final staring at the stars. We thought we saw Orion, the planet Venus and the Cross at the end of the Via Lactea. 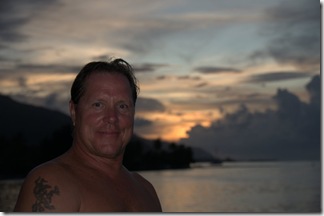 We had a lovely day with Steve. He is a great guy with a big heart. After a while we went back to our bungalow.