Use this section to see facts such as hotels, restaurants, maps and so.

Oasis Paradise Lodge No URL… but in TripAdvisor there is the more luxurious one: link

We did not sleep much as the hotel was located in the junction of two main streets and honking was non stop all night long. In addition we were picked at 3am…

The tour consisted in breakfast in Chivay after 3 h trip. The road trip was scary and we could not sleep either,  the van glass was frozen when we reached the top at, 4900 m. Breakfast was bread with jam and a bit of cheese with the mandatory mate de coca… a bit scarce and opened air place which was cooler than outside. Then we continued towards the Cruz del Condor for nearly 2 h.

After taking some pretty photos to this huge birds that can have up to 3.8m with their wings spread we went to Cabanaconde. That was our departing point for the trekking. It is located 30min from the edge of the Colca canyon.

Colca Canyon is a canyon of the Colca River in southern Peru, located about 160 kilometers northwest of Arequipa. It is Peru’s third most-visited tourist destination with about 120,000 visitors annually. It is more than twice as deep as the Grand Canyon in the United States at 4,160 m depth. The Colca Valley is a colorful Andean valley with pre-Inca roots, and towns founded in Spanish colonial times, still inhabited by people of the Collagua and the Cabana cultures.

We headed there and started our two day trekking, descending 1200m to the bottom of the canyon where there is a place by the river called San Gallen or better known as Oasis. The starting high 3300m.

There Nuria had a bath on a swimming pool of our Oasis Paradise Lodge, of course just running water from the river, great location and a swimmingpool.
We had lunch there and then we went around looking for a way to access the river. Pretty fun as it was not trivial.
We had dinner with candles. Obviously there was no electricity. We slept in a very rudimentary hut with just a bed and a candle and a lot of blankets.
Next morning we would have to wake up at 5am with our head lamps to start the ascend. 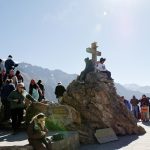 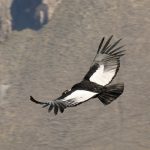 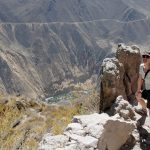 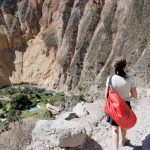 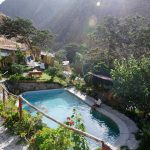 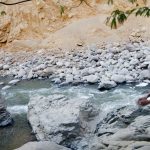 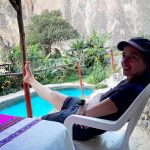 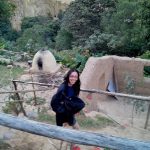