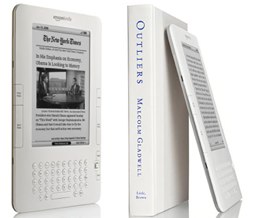 Just in time to remind holiday shoppers, Amazon has announced an 85% battery life increase as well as a native PDF reader application for the Kindle digital book reader. Whereas the previous battery life topped out at about four days with wireless access turned on, the updated Kindle will run for seven days without needing to be charged.

The native PDF reading support is nice too, since previously users either had to pay a $0.10 per conversion charge or go through several steps in order to convert documents from PDF to the Kindle format used by the eReader. Now PDF can simply be transferred via USB connection or emailed to the user’s @kindle.com email address to be added to the Kindle.

While the native PDF support will also be made available to existing owners of the Kindle (or at least, some of them — Amazon’s announcement doesn’t specify what the requirements are) via a wireless firmware update, the new battery life-infused Kindle will apparently only be rolling out to new buyers.

It’s a couple of minor but nice updates, and a good excuse for Amazon to capitalize on the fact that the holiday season’s other hot digital book reader, the Barnes & Noble nook, is already completely sold out for reportedly the remainder of the holiday gift-giving season. That’s more bad news for B&N, who are also busy fending off a lawsuit from Spring Design over its Alex eReader — which shares some of the key design principles with the nook, a similarity Spring Design says is no accident.

Are you considering picking up a digital book reader for yourself or a loved one this holiday season?