Picasa 3.5, a new version of our free photo editing software for Mac or PC. Picasa 3.5 has name tags and uses the same technology that powers name tags on Picasa Web Albums. With name tags, you can organize your photos based on what matters most: the people in them.

When you first launch Picasa 3.5, it will start scanning the photos in your computer’s collection to create groups of similar faces. It puts all these groups into the “Unnamed People” album, where you can easily add a name tag to a set of faces by clicking “Add a name” and typing the person’s name. Make sure you’re signed into your Google account so names you type will auto-complete with your Google contacts.

After you add a name tag, all pictures that Picasa has identified as that person are automatically added to a new album named after them. As Picasa scans more faces, it will suggest pictures that it thinks match faces already in your people albums. These suggestions are shown with an orange question mark next to the person’s album.

In addition to uploading and sharing your newly tagged photos to Picasa Web Albums, you can use the name tags you’ve added and your new people albums to do creative things with your photos. For example, you can find all of the photos with the same two people in them, create customizable face collages, time-lapse movies, and more. 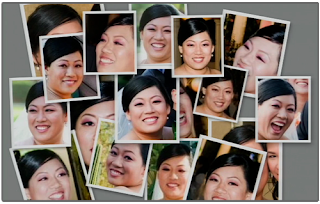 Picasa 3.5 also has integrated Google Maps to make geotagging even easier. Now you can add location info to photos — one photo at a time or several photos at once. Simply select pictures, click the Places panel, search or surf to a place, and drop a pin in the right place on the map. Once you’ve added geo tags, you can select a group of photos and see where they were all taken. 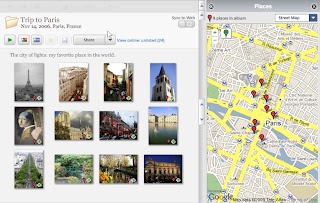 Nothing has changed in the way the geo information is applied to your photos — it will still write exact location data to your photo file, but now you don’t need to install and open Google Earth to add geo tags (although you can still geotag with Google Earth if you want). And of course, any location data you add in Picasa will automatically sync to Picasa Web Albums when you upload.

We’ve also given our import process a major make-over. Designed based on feedback from Picasa users, you can now upload photos right to Picasa Web Albums during the import process from your camera or memory card. Since you don’t always want to share or upload every photo that you import, you can choose to upload or share only the starred photos, while the rest are imported to your hard drive.

Plus, we’ve added an entirely new ‘Tags’ panel in Picasa 3.5. You can use the ‘Quick Tag’ functionality to access your most commonly used tags, or use tag counts to see the number of photos to which a tag has been applied. 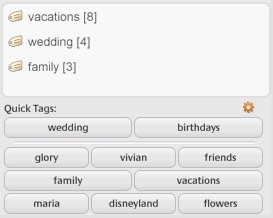 Finally, we launched Picasa for Mac as a beta Labs product 9 months ago. Now that Picasa for Mac has almost all the same features as the PC version, we’ve decided it’s time to remove the beta label. Remember that Picasa for Mac is designed to “play nice” with iPhoto — Picasa takes a special read-only approach to editing photos stored in the iPhoto library, duplicating files as needed, so your iPhoto library isn’t ever affected when you use Picasa.

Here’s a short video overview of what’s new in Picasa 3.5.