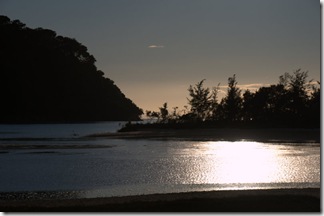 Tuesday at 7 we where up, but I did not want to get out of my sleeping bag, as it was freezing cold outside. In the end I had to go to the toilet, so I decided to get everything packed and prepared for the next experience. At 9.30 our guide, Cam, arrived with the paddles of the kayaks that were sitting in the beach since the day before. We got our basic instructions on how to advance and steer the kayak, what to do if the kayak tip over, plus the weather warning of wind storm (which is not very good when in the sea) and off we went. Me at the front marking the rhythm and dani in the back trying to follow and steering to the right or left. The first half an hour was fun, a little bit windy and full of energy paddling at full speed, we were always the first kayak, and we often had to wait for the other 3. We stopped at another island with seals and we got really close (because the wind pushes us to the rocks) to them, they are so cute!! Then the sea got quite rough and the waves splashed against me, my part of the kayak was flooded with water and I was sitting in a tiny swimming pool…

At 12.30 we stopped for lunch, some cheese and chicken sandwiches, indescribable roll and a chocolate cake plus chocolate cookies made with beef fat ( disgusting, but very tasty). At that point I have had enough, but we were not even at half way!!! This was the longest kayaking in the Abel Tasman National Park ( we maybe should have read the full description). So we continued, my left arm was already insensible, but my fist were getting the shape of the paddle and it was becoming increasingly difficult to open them , my muscles were all tight!! Dani complained that I had to be more regular with the paddle, but I was in pain, and could not concentrate. We got to another bay and a house that had been sold for the bagatelle of 10 million NZ dollars, the poor guy could only get to his paradisiacal home by boat and he was unlucky enough to have his part of the beach designed motor boats recreational area, so imagine the peace and calm with 50 tourists every day queuing in front of your bedroom. 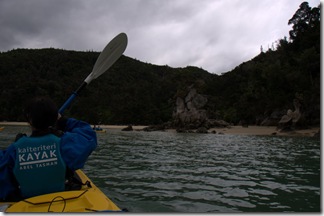 We crossed the worst mile in the area, in terms of wind conditions and possibilities of getting stamped against the rocks, and we arrived to split apple which is a rock that is split perfectly in two. We heard the Maori version of two worries fighting together with the tamahoe and one accidentally hitting the rock and the geologist version which is that water fissured into the rock splitting it in two. This was our last stop before the final, the last 30 minutes were never ending story part 4, but we finally got closer and raced into the beach, we nearly won, Cam arrived 5 minutes early, not minutes but a while before us.

We took the team picture, wash our feet, change clothes and to the car, as the plan was to sleep in Blenheim so on Wednesday we could get to Kaikourua for the whale watching in the afternoon. We had booked it on Monday for 3.30, but ideally we should arrive by 12.30 pm. We were tired so we got to Renwick, which is in the Marlborough area were all the wineries are. A nice place with a match box size bedroom, but at 9 pm we were in bed, already sleeping.