Who needs roads in Paradise? Our way to Moorea 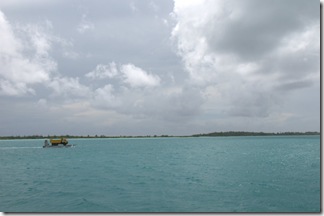 Our last morning in Bora Bora and our first day in Moorea. Another piece of paradise lost in the pacific ocean. I started the post today with who needs roads in Paradise because in our way to the airport, with the boat, we crossed a truck! a truck in a boat and it reminded me the t-shirt my brother bought 15 years ago from "back to future" saying who needs roads, meaning the delorian traveling through time.

The next picture is nuria, blogging from the beach, in front of our bungalow in bora bora. 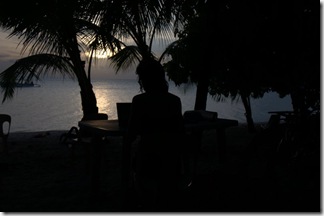 This morning we tried to fix our visa problem. Lately is refusing all payments… and we wanted to pay all the car rentals with the American visa gold because it has a great insurance. Finally we managed to talk to them. We called them with skype by buying some more wifi time. The connection dropped several times but they called us back fortunately. The fact is that we have reached the limit! how embarrassing!! and it won’t be reset until the 7th of March. The good news is that in 48 hours the UNFCU will transfer the funds to the visa account so we will have credit again. If I manage to have Internet before I will try to do it via e-banking. Something good about the US visa is that it is like an account. You can top it with money so you can spend more. Anyway, the fact is that this morning we took the "truck" or local "bus" to Vaitape, which is sort of the "capital" (more than two houses) where we took the boat to the airport. There I took the photo of the truck 😉

Once in the airport we checked in and we had a mango drink. Bora Bora’s airport is without no doubt the most beautiful airport in the world. It is small, traditional, but having a drink in the little bar with the view over the lagoon and the mountains has no price. Look at nuria having her mango drink 😉

After a while we took the plane, always these little planes with helixes, and went to Huahine and then Moorea. In Moorea we left the plane and surprise, in the Airport and looks like he was going in the same flight, starting in Huahine, Steve!! our Californian friend we met at Fetia’s. They lost his bags… incredible in a 20 minute flight…. We went outside but after 30 minutes waiting for the "truck" in the main road 5 minutes from the airport we were told that it might not come, so we went back to the airport and Gino took us in his taxi. The three of us. Gino will bring a rental car for us tomorrow here at Motu Iti, where we are staying now. We will have the car for 24 hours starting at 8.30. We will go an pick up Steve and go and visit the Island that has around 60 Km of circumference. They make us a good price. 7200 for the day. 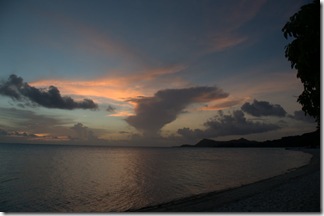 Today when we arrived at Motu Iti guesthouse we were like… wooooow. Our bungalow is top of the class. 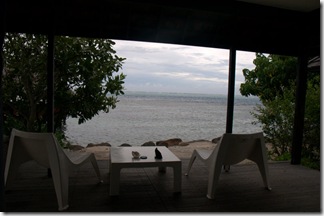 Look at the picture on the right…. We are actually 2 meters from the sea with a fully equipped bungalow. Beautiful place this Motu Iti. The owner is a Japanese old guy with a lot of taste and attention to detail. He has a restaurant here also by the lagoon. We have free kayaks and just in front we have plenty of coral reef. We just had a shower after snorkeling a bit in front of the bungalow. Incredible. Nuria is having a shower while I am writing. In an hour or so we will go to the restaurant to have dinner.

Today after we arrived to Moorea we went walking looking for a supermarket to buy breakfast and something for lunch. 1 hour walking!!!! aarrghh. We did not mind as the views are astonishing and it is worth to walk around.